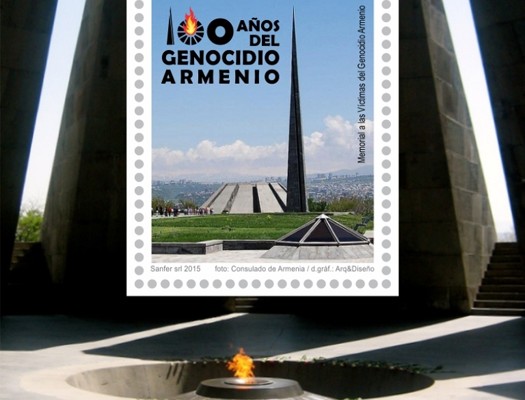 MONTEVIDEO, Uruguay – A stamp sheet to commemorate the 100th anniversary of the Armenian genocide was released by the Uruguayan Post Office and Ministry of Foreign Affairs.

“Uruguay was the first country to recognize the Armenian genocide by law 50 years ago, a transcendental step in a struggle that continues to the present day,” said Uruguayan Foreign Minister Rodolfo Nin Novoa, who also announced an official delegation to Armenia for the centenary on April 24.

According to Novoa, and the stamp “is full of significance and emotion because it delves into the memory of all those victims of the brutal crime of genocide” whose struggle for recognition is supported by Uruguay.

The Uruguayan Minister of Tourism and Sport, Lilian Kechichian said “the suffering of a 100 years has the added pain of still not being recognized by the whole world, but Uruguay has set an extraordinary example.”

“It is a huge honor that Uruguay received our grandparents, our parents, offered them work, allowed each one of us to study and live in a country of peace,” she added.

The Archbishop of the Armenian Church in Uruguay, Hakob Kedenjian, also applauded the country’s role in the struggle for international recognition of the Armenian genocide.

“We are very proud to live in this country that defends just causes because the greatness of a country is not measured by its military might, economic power, its extensive borders, but by how it defends human rights,” noted Kedenjian.